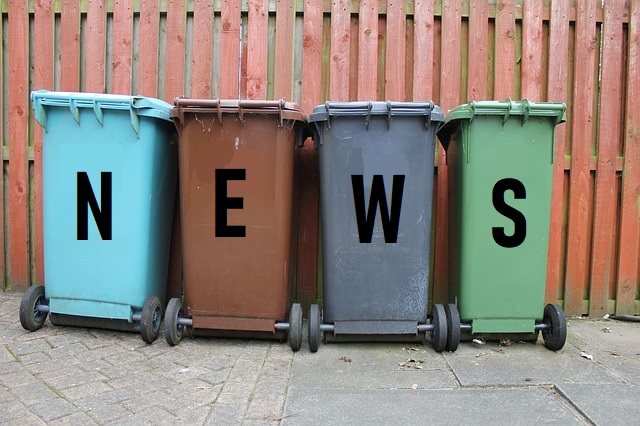 Across the UK, efforts to recycle, reuse and reducing waste are underway. All sectors of society are involved, some more than others. Here is an overview of various items in recycling news today.

Recycling & Waste World online reported that Wales leads the way in UK recycling. During the period from July 2012 to September 2012, Wales recycled 54% of their rubbish. This increase has been attributed to an improved collection system and the dedication of the people.

Nesta, the Cabinet Office's innovation foundation, has selected six finalists in the contest for ideas to better motivate the people to take waste reduction and recycling seriously. The competitors are looking at ways to reduce food waste, encourage recycling, and improve overall waste management systems. The £50,000 grand prize winner will be announced in November.

The Health & Safety Executive has reported that from 2004 and 2012, 97 workers and 19 civilians were killed and 3,722 were severely injured during the pursuit of waste management and recycling activities. This has caused the sector to be named as one of the most dangerous in Britain.

Valpak has sold its Preston-based operation and Materials Recovery Facility to newly formed JWS Lancashire. The new management company has regional jurisdiction. The new company was created to capture and divert from landfill 40,000t per annum of plastic-based material.

Decline in Landfill Use

According to Ray Georgeson, CEO of the Resource Association, there has been a steady decline in the use of landfill and this points to how successful the Landfill Tax has been at diverting materials from landfill. Unlike Wales, who posted 54% waste recycled in the third quarter of 2012, the English rate is about 43%.

For the next two and one-half years, jobs will be available in the waste management industry for young unemployed people in London. Skills will be taught by the Kotuku Environmental Labour Project. An initial two week training program conducted at local recycling centres will get young people started on what is hoped to be a long term employment opportunity.

Calls for better inspections, auditing and material sampling have erupted after Defra initiated its 12 week long consultation designed to increase the quality of England's recyclate. Apparently some Materials Recovery Facilities are not producing consistent output. Ray Georgeson of the Resource Association warned that the current monitoring cannot deliver results that satisfy the regulatory requirements.

Scotland may be paving the way for a new application for old rubber tires. The South Lanarkshire Council has approved a measure by which old tires will be baled into wire baskets along with stones. These baskets will then be used to form a road foundation. Peat is being removed from an East Kilbride road and is being replaced with the tire and stone baskets in the belief that this foundation will be more stable than the peat.

Think. Eat. Save. Reduce Your Footprint

"Think. Eat. Save. Reduce Your Footprint". This is the slogan for a new campaign by the UN Environment Programme (UNEP) the Food and Agriculture Organisation and their partners. The goal of the program is to reduce 1.3bn tonnes of food that is wasted each year. Essentially, the effort will require tighter monitoring of such things as waste, food donations, and spoilage.

The green light has been given to the Scrap Metal Dealers Bill which has now passed through the House of Lords Committee Stage. The scrap metals and waste industries have given this measure their stout support. Metal theft is on the rise worldwide and this law will make it tougher to get a license and will enhance enforcement of existing scrap metal laws.

The Waste and Resources Action Programme announced that an effort has been launched by a task force consisting of charities, retailers, wholesalers and manufacturers to develop greater surplus food supplies for the purpose of feeding the hungry and reaching those who are in need of a better dietary regimen. The core concept is to ensure that societies poorest will be served and food waste will be reduced in the process. Quite a noble plan since it is the case that nearly 1.3bn tonnes of food are wasted per annum.

A shortage is coming according to scientists who are demanding that manufacturing be altered so that the world will not run out of raw materials. They are also calling for an increased focus on recycling and reusing existing goods to help ease the burden of dwindling resources. Politicians and scientists do not normally agree on much and this case is no different. While it is clear that recycling and reduction in waste makes good sense, scientists have been hard-pressed to deliver evidence that substantiates their assertions.